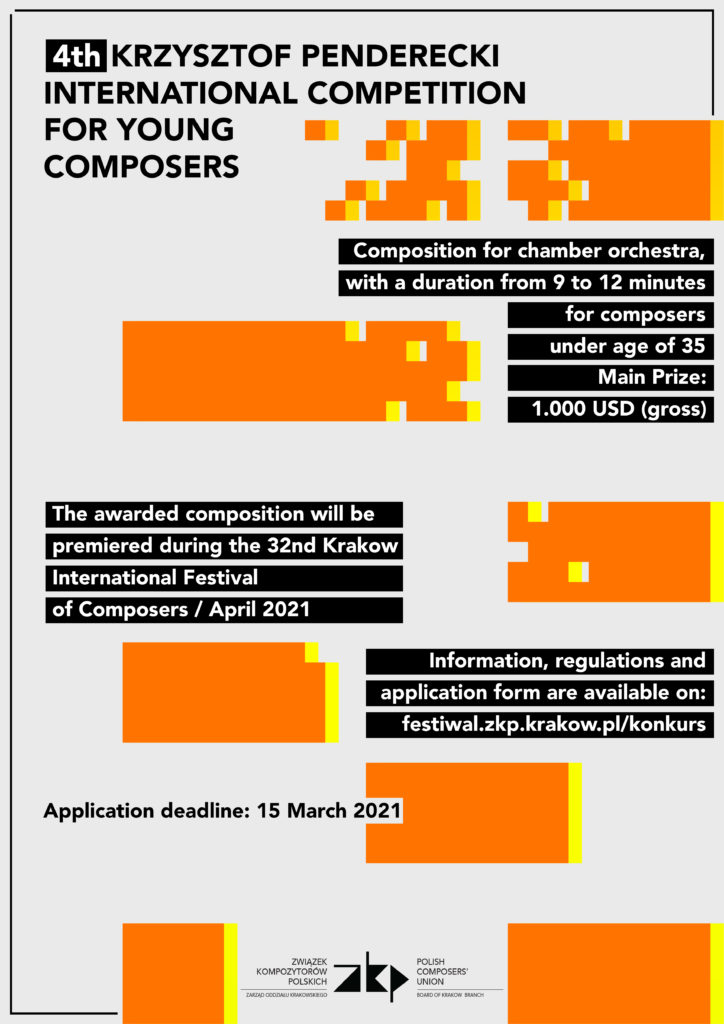 Minutes of the Meeting of the Jury

The meeting of the Jury of 4th Krzysztof Penderecki International Competition for Young Composers was held on the 20th of March 2021.

37 (thirty seven) scores (from the following countries: Albania, Argentina, Austria, China, The Philippines, France, Greece, Indonesia, Canada, South Korea, Poland, Turkey, USA, The Great Britain) were submitted to the Competition. 10 (ten) of them were rejected as they were against regulations.

The Jury, after examining 27 scores, decided to award the Main Prize – 1,000 USD – to the composition titled:

From the ground (emblem: calibri)

When the envelopes had been opened, it appeared that the winner of the Main Prize is Jongsung Oh (South Korea). The winners of the honorable equivalent distinctions are Franciszek Araszkiewicz from Poland (emblem: Herne), Michał Dorman from Poland (emblem: calibri) and Ashley John Long from the Great Britain (emblem: CDF929).

The official reading of the protocol and the premiere of the composition granted the Main Prize will take place on the 10th April 2021 as a part of the 33rd Cracow International Festival of Composers.

The minutes were concluded.

The Secretary of the Competition

The subject of the competition was a piece for flute, clarinet, violin, viola and cello.

The subject of the competition was a piece for string quartet.

The subject of the competition was a piece for flute and piano.

Office of the Krakow International Festival of Composers: